One of my first visions of me in my tiny home, way back when the 160House was just an exciting thought and not a three ton monster taking over my life and my parents’ yard, was of me in a loft below a wide open skylight. As I developed my ideas and changed the design time and again, the skylight over my bed through which I would gaze at stars and crawl with a friend to clink beers on the roof, remained a non-negotiable feature.

Well it turns out that big skylights are expensive, like really expensive. A company called Velux essentially has a monopoly on operable, residential skylights and the price for the 4×4 hatch skylight I had in mind was going to be at least $1200.

I compromised. Right before I bought a 2×4, I found a 3×4 for $800. Still more than I had wanted to spend but I think worth it. Except that it doesn’t come with the installation kit, which is another 300 flippin dollars!!! So ok, it turned out to be a pretty expensive feature.

BUT IT IS SO PRETTY!

I couldn’t wait to install. I am not ashamed to say that sometimes I went out to the house just to look at it and giggle. Unfortunately, I had to wait a bit because of something called rain but when the sky cleared it was time!

Just one problem… I am pretty sure Velux writes their instructions to be as confusing as possible. Watch this old classic clip to get a sample of the Velux instructional experience.

There were no words on Velux’s instructions so I took the liberty of writing some for them.

Step 1: This is a skylight.

Step 2: This arrow points to something important and these ones going in opposite directions are just to be silly.

Step 5: Here is a picture of an installed skylight to motivate you.

Eventually each of us had figured out half of the instructions and after doggedly defending our own interpretations, we realized that we both had separate but critical pieces of the puzzle. We put those somewhat literal puzzle pieces together and made one whole installed roof window.

Sadly, I can’t yet spend my days escaping to my loft to look at the sky, not just because that whole area is covered in sawdust and nails but because the rainy season is not quite over so I had to re-tarp the roof. However, the tarp is blue so if I imagine real hard I can pretend it’s the sky!

In other news, I went to a Homes Show at the local fairgrounds with my buddy Ejay to look at the tiny houses and steal ideas. Confession time… this was actually my first time inside of a fully constructed tiny home! Don’t worry, I haven’t changed my mind, in fact I am even more excited now after getting a feel for the space, seeing some of my own ideas in action, and getting some new ideas in the process! It was super fun and lookatthistinysinkIwantit! 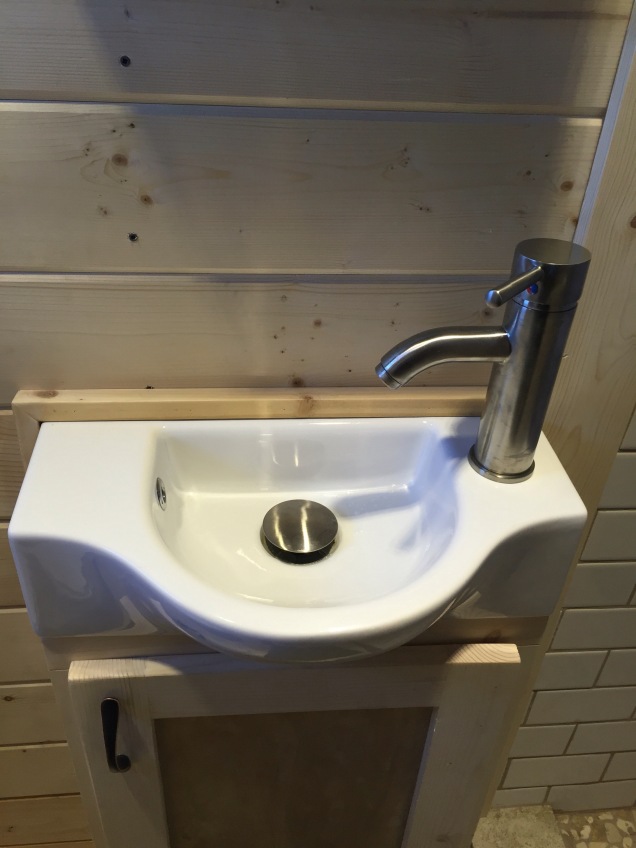 Thank you time! Thank you to my dad for laughing with me throughout the skylight installation process. Thank you Ejay for being my homes show buddy! And NO THANK YOU to Velux for your monopolizing, price gouging, lousy instruction ways (But you do make beautiful products to be fair. I love my skylight so I’m not that mad).

Next time on the 160House blog: Katelynn does electrical and loves it!

In early October I began to make what felt like my first real progress on the house. I had a stack of lumber delivered to my house and it was time to start framing.

It seemed as if this stage would be quick and easy. In one afternoon, my father and I busted out one of the long walls and laid out most of the second.

The next morning my parents left to go gallivanting across the United States in their own tiny home/recreational trailer, leaving me to complete the second wall on my own. I was excited. As much as I love working with and learning from my father, I was eager to prove my own capabilities. My last words as my parents pulled away in their truck was “When you get back I will have this frame done and the walls up!” And I truly believed it.

If it took us both a quarter of an afternoon to build one wall, then I decided it would take me a full day to finish the one we had already started. I fully anticipated being able to gather a party to raise walls by the following week.

But I knew after the very first afternoon that this was going to be a longer endeavor than I anticipated. For that afternoon and several afternoons after, I pulled more nails than I left in… by a lot.

For my dear readers to understand the magnitude of my struggle, I am presenting to you all a list of mistakes you can make while framing, a list which has been thoroughly tested and not at all approved by yours truly!

Ways to F *** Up While Framing

There are my mistakes. I hope this inspires you to go out and cuss at your own projects.

When I decided to take on the 160House I knew it wouldn’t be easy but I did think that my glowing intelligence and positive attitude would make for a quick learning curve. After spending four weeks making and remaking mistakes and practicing my most colorful language skills, I now know that I am going to have to ride this out on pure stubbornness. No matter. I have plenty of that.

Things did eventually pick up. After 4 work days of absolute struggle, I finally started to leave in more nails than I pulled and I stopped having to yell at the wood so much. Eventually I did finish that wall and was ready to gather friends for a good old fashioned barn raising.

The Raising of the Wall

Many heroes showed up at my house that hope-filled Wednesday. My sister and little nephew came to cheerlead and take photos, and my friends Kurt, Ejay, Kate, and my partner Joe came to do the heavy lifting. Together we heaved the surprisingly heavy wall over to the trailer and set it down. An end piece cracked off and fell to the ground. Bad omens (or workmanship but let’s say omens).

After attaching a new piece where the other had fallen, we had to strategize. First, problem was that it appeared that the wall, when lifted, would collide with one of the trees beside the trailer. The second problem was that if we pushed the wall any closer to the edge, there wouldn’t be any room for it to slip and it could fall off of the trailer.

We ended up pulling several wooden saw horses to the side of the trailer and lifting the wall on top of those. The plan was to drag the wall back to the trailer and then prop it up quickly by attaching a piece of wood to the tree and wall. (My quickly rejected suggestion was that we attach boards to the trailer as stoppers and just try lifting it to see if it would actually hit the tree. Remember this because I will briefly gloat about it later)

The plan at first seemed to be working. With a little will power and grunting, we got the thing upright, but as quickly as we got it up, things started to go horribly wrong. One of the saw horses began to sink into the ground, tipping backwards. The bottom of the wall started to slip out, causing the top to tip back down towards us. Panic ensued as we simultaneously reconciled with our own mortalities and refused to relinquish our delicate holds on life. We used our superhuman, near death experience strength to keep from being crushed, setting the wall back where we started.

For some reason, everyone wanted to go home after I almost killed them.

I probably should have felt more disappointed but mostly I was just thankful that nobody had been hurt and proud of myself and my friends for trying.

The Raising of the Wall Take 2

My dad came home the next day and was nice about not mocking me for my overzealous declaration.

A few days after he returned, just the two of us used a pulley system to get the first wall up. It took about an hour and there were no near death experiences. (For the record, I would like to say that we put a board down to keep the wall from sliding and that the wall didn’t even come close to hitting the tree when we lifted it so I am smart and everyone should listen to everything I say. See, I told you there would be brief gloating).

It was just one wall but it’s my wall. I made it and I lifted it, all with the help of my amazingly supportive friends and family. I am so proud of myself and thankful for my community.

So THANK YOU to my Dad for being my teacher and making things look so damn easy, to my Mom for photographing our framing day, to my sister Andra for photographing our wall raising day, to my nephew Carter for being our adorable wall raising mascot, and thank you infinitely to my friends Ejay, Kurt, and Kate and my wonderful partner Joe for their time, hard work, and misplaced trust. This would not be possible without all of your love, support, and efforts.