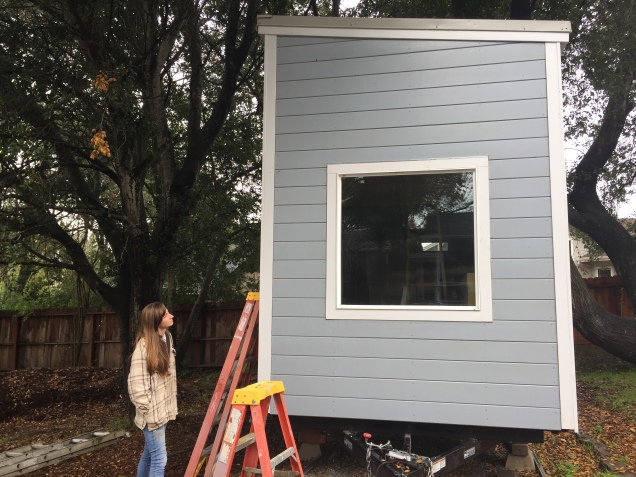 After literal years of putting time and effort into what appeared to be a generic rectangularish structure, local woman Katelynn Wiley was surprised to discover she’d been building a tiny house all along.

“I had seen them on TV before but I never put two and two together,” Ms. Wiley said in a statement to herself. “It was truly shocking to look up one day and see my project for what it was. You just never think it’s going to happen to you.”

The moment of realization occurred after siding for the structure was properly waterproofed and ready to be installed.

Ms. Wiley and father Lon Wiley had begun to nail boards to the wall when Ms. Wiley reportedly stepped back to say, “Holy shit it’s a house.”

“It’s remarkable that you can spend so much time and energy on a project and not really  grasp what’s going on,” Ms. Wiley explained, “I feel like Mrs. Gacy. I should have known.”

Mr. Wiley, who has been an active general contractor for 40 years explained, “In my whole career I’ve never seen anything like it … it’s just so damn cute.”

Despite these ground breaking revelations, the father daughter team reported an uncharacteristically smooth month of work.

Ms. Wiley, who maintains a once monthly blog on the project, expressed concern about how she would go about writing an interesting report on a period of work with so few comical struggles. “I think I’ll write a satirical article conveying what a drastic difference siding makes in the appearance of the house and also lightly mocking myself for how long it’s taken me to get to this point,” she explained.

In the mean time, Ms. Wiley would like to express her gratitude to those who have supported her through this trying time of transition. “One day you’re pouring your time and energy into a big wooden trailer thing and the next you’re building a tiny house. I’m just glad I have friends and family to help me feel grounded in this time of great change.”